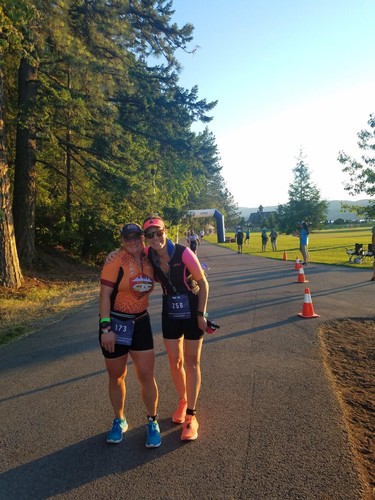 Race recap Ironman Coeur d’Alene, ID. HOT, brutal, record breaking, epic day! 103 degrees, 139 degrees radiating off the pavement! My goal was to avoid heat stroke like I got at Chatt in 19. I approached it as a long training day; not a race! I warned everyone my times would be slow but I wanted to finish and enjoy the day!


This was my first IM I went solo to without my racing peeps. Great to see fellow CTCers out there! Jessica Katherine, James Mango, Henk Stock and Brandon Thomas. Also great to have Mark Durno’s sister Michelle competing in her first IM! I got the Durno with hair for this race! Haha! Also first race my boyfriend attended! He exceeded my expectations with support and getting photos to document the day! Thanks babe!


Fantastic logistics! Very comparable to Chatt. I would rank it just above since the swim venue was right there also! I enjoyed the check-in times (minimal wait). I hope those stick around! Race number assigned at check-in. We stayed about .7 from the village on Sherman Ave at a small motel which worked out really well! Walking distance to everything!


Typical transition; only morning clothes and special needs bags provided. Everything brought in race morning. Arrived at transition early, got set up and then hung out. I love the excitement in the air before the race!


Found Michelle and Tom in the sea of people and Michelle and I entered the water just after each other! Took a while to get people into the water. The water was chilly but comfortable with my sleeveless wetsuit. Super clear! Got a little bumpy at the turn around. 2 loop course: I was getting quite a bit of contact so swam wide. Quite a bit of sun glare which I expected. I had some trouble last year with breathing issues in the water so I took it extremely easy and conservative. Beautiful glacier fed lake! Second favorite swim (New Zealand is still #1!)


The bike course was fabulous!!! Gorgeous scenery! It was a 2 loop course of 2 out-and-backs. The first was along the lake and breath-taking views!!! The second was out on highway 95. We had a small bit of shade in the morning but no reprieve from the sun after that till the sun went down! The temps steadily climbed with the elevation! Haha! I stopped every aid station and poured water over myself and hydrated. I actually only filled one bottle at a time since it took merely minutes to get hot! The elevation was very manageable; slow and steady. No steep grades; just consistent; which I loved! The first loop was uneventful but the temps started wrecking havoc in the second. People started dropping like flies (which supported my approach) and I stuck to my plan. I have never seen so many people on the side of the road both mechanical (tires exploding like crazy) and medical. They actually sent busses out to pick up people! I rarely saw officials policing the course because they were so busy attending to people. There were 2 “no-pass” zones which needed patrolled better as there were a few serious accidents. I loved the bike!


Got back to T2 and took my time changing shorts and tried to find some shade in transition. Feeling ok but knew the oppressive heat was taking it’s toll so I made the decision I would power walk the marathon. I took a soccer sock out with me that I filled with ice and put around my neck to keep my core temp down. 3 loop run. Observed more people walking the marathon then in my previous races and definitely earlier in the run then normal. People continued to drop medically all around me. The crowd support in the neighborhood was amazing! People with hoses and sprinklers and cheering all day and night! This community really embraces the race and is so supportive!! I made a conscious effort to keep my feet dry while dumping water over my head. The views along the lake were awesome! On my second loop I met up with Michelle and we walked the rest of the race together! Her legs are longer then mine and I tried my best to keep up! I ended up with some severe chafing from that! It was great to feel her excitement build as we got closer to the finish line and I reassured her we would finish in time! Scotty was amazing all day being out there and getting photos! Having support means so much! We ran into her friend passed out on the side of the road waiting for medical to get to him and it confirmed our decision to walk it in and finish! We saw a beautiful sunset over the lake as we finished the final loop and it was nice to get a break from the sun!

Approaching the finish line I asked Michelle if she wanted the finishers chute to herself snd she said no, we would finish together! We made it to Sherman Ave; we could see and hear the finish line and started running. We grabbed hands running down the chute and finished together! Priceless!


I regret not being able to stay around for the later finishers but I had blood running down my legs and needed to get back and address my war wounds! Haha!


Congrats to all who braved the start line that day and thankful to be one that was able to finish! 27% DNF that day! Attitude of gratitude to be able to be out there and for the ability to do this! Nothing is ever taken for granted!