Push your mind because no one else will. 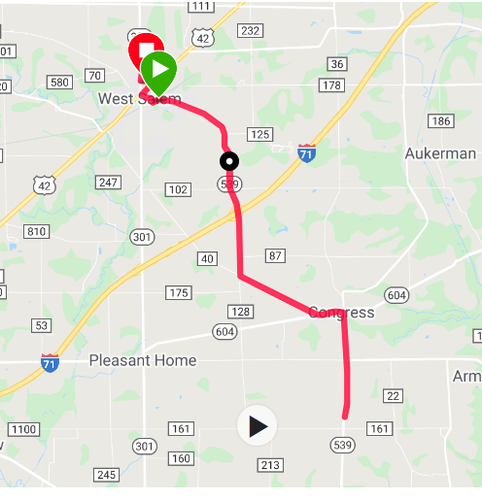 This race is on the OSHITT (Olde School House Individaul Time Trial) course which has also been used for the Ohio State Time Trail Championships.  I have never ridden this course but was usually holding bikes in the start house.   COVID-19 put the kabosh on helping with the race doing what I love....getting people started on their ride.


So now I had a chance to actually ride the race and test myself.  My first attempt was great.  Read that race report (once I go back and do it).


Coach Angie Ridgel has been giving me some great workouts for the bike to increase my power output.  I felt good coming into the race.


I had some good rest leading up to the ride as I was out of town for work.  Everyone else (about 8) was riding on Saturday morning including Aimee.  She said it was hot and miserable.  Not everyone had an "A" race.  Because of my travel schedule I would be riding my TT very solo, no one else around, in West Salem.


The day was forecast to be another hot one.  I tried to get to West Salem early enough to beat the heat.  I had a 30 minute warmup on the bike with some solid efforts to warm up the legs.  Warmup is a misnomer  because I was plenty warm, but waking up the legs for a heavy effort is crucial for time trials.


At 9:30AM I was at the mailbox designated as the starting point for the TT.  The out and back course is 12.5 miles in total (just a hair over 20k).  The trick is to watch your bike computer to know when to turn and do so safely on an active country road.


The empty road stretched out ahead of me.  No signs of Amish buggies (obstacles the day before) and no other traffic to be seen.


3..2..1 and I was off.  With the proper warmup I was abel to settle in pretty quickly to the mind numbing painful effort of a 100% output time trial.


It didn't take long, rounding the first curve in the road, to feel the effects of the SW wind.  Post ride review had the winds at 12-15 MPH.  Damn I was not expecting this added effort.  Take what the day gives you.


I buried my head and pressed forward making sure the effort in my legs was sufficient to maintain the power coach was asking from me.  Being a near sighted old man I couldn't even look at my computer to know if I was in my power zone.  I could barely make out the distance traveled to know my turning point.


Just keep riding.  Keep yourself on the edge.  Ask what you can from your legs.  Grind it out...spin it out...stay aero.


The course meanders in a southeast direction so the at times I had the benefit of the wind and others I was into the wind.


Two sections of the course have the potential to be busy intersections.  The first is a sweeping curve on Route 539.  The problem is that heading south there is a stop sign.  Add to that the height of the corn made it difficult to see traffic coming from the east or west.  However I was able to see traffic was clear and I blasted through the stop sign.  I admit that it was not "proper" for me to do that but I handled it with extreme caution.


Oh..did I mention the horse crap on the road?  Road Apples as cyclists like to call them.  There were a few piles ot there.  some were flattened by cars and trucks but I avoided them non the less because I didn't want to kick up dried horse poop.  I was happiest that the roads were dry becuase that becomes a horrendous mess...which I experienced at the Road Apple Roubaix in March, yuck.


Through the town of Congress the course turns south into the wind.  That's okay.  Head down and keep pedaling.  I finally reached my turning point and safely checked for traffic and made the turn.  Now the wind was slightly at my back but going through Congress the road went up just like my power output.  This small section was the high point of the route.


Turning north on Route 539 the road is downhill approaching I-71.  The overpass of the highway is a nice gradual uphill that rewards you with a great downhill section for the final push of 2.5 miles.


Half mile from the finish is a nice curve that heads west towards West Salem.  It would put me into the wind but that is not what was worrying me.  The tanker truck approaching the curve was in my sights.  I just had a feeling that he would enter the curve a little fast.  I pushed myself to the right of the white line onto the last segment of pavement as I saw the truck ever so slightly drift over the double yellow lines.  Everyone was safe but it gave me a moment of concern.


Then the blast from the truck turbulence hit me.  I screamed into the wind, increased my power and held my line through the wash from the truck.


My computer finally told me I had completed the 12.5 miles and I could ease up.  Spent I spun my way back to my care to recover.


Despite the wind I was able to better my time by 6 seconds while increasing my average power output by 10W.  That is a win in my book.